Many people believe that the Garden was itself Eden, but NO!; the Earthly garden was NOT Eden, but was a garden created WITHIN Eden, Gen 2:8, “And the LORD God planted a garden eastward in Eden; and there he put the man whom he had formed”.
Gen 2:10 also confirms, “And a river WENT OUT OF EDEN to water the garden;”

This means, before the Garden was created for Adam, Eden was already there; the earth was already a garden with trees, grass and various fruits etc. Gen 1:11, “And God said, Let the earth bring forth grass, the herb yielding seed, and the fruit tree yielding fruit after his kind, whose seed is in itself, upon the earth: and it was so”.

To conclude, the Garden of Eden [dwelling of Adam and Eve] was a garden placed in a bigger garden called Eden.

The Water and The Blood Part 1 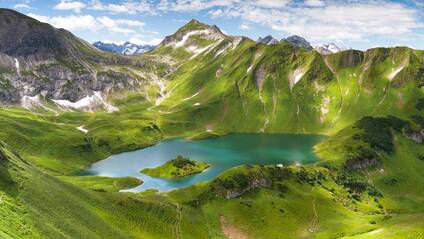 Also, I need to mention based on scriptures that the Garden was on Earth, located in the Kuwait, but it was not in the physical realm; it was in another dimension. This also confirms parallel dimensions.

Let us look at the unrecognizable secrets in scriptures.
Yes, the Garden of Eden was in the Eastern side of territory of Eden, but can you put a door or gate to a garden that is not enclosed by a fence or wall? NO!.
​You can only put a gate or door to a placed that is fenced. Yet, the bible says in Genesis 3:24, “Then he put Cherub angels and a sword of fire at the entrance to the garden to protect it. The sword flashed around and around, guarding the way to the tree of life”.

Here there scripture is saying that the Cherubim were placed to guard the eastern side so that they they would not re-enter the garden to access the tree of Life. The fact that a specific cardinal location was used for the exit, and guarded, it means that the other locations were not accessible.
Note: The Cherubim guarded the eastern side of the Garden, while their swords guarded the entrance to the Tree of Life.

If it was not so, wouldn’t it be possible for Adam and Eve to have sneaked in by another way; let’s say the western or northern side? It would seem logical to do, but they could not, why?
Because the Garden was not in the natural earthly realm, but in another dimension, and to go there you had to pass through an “ENTRANCE”. This entrance is what is called a “Portal” or “Spiritual Gate”. This gate is similar to the gate in Jacob’s dream (Gen 28:17).
The Cherubim were placed at the Portal or spiritual gate to that Garden in Eden so that Adam and Eve would not re-enter.

In Ezekiel 28:13, it says concerning Lucifer, “Thou hast been in Eden the garden of God”… This Garden name Eden was the Heavenly Eden, the spiritual dwelling of the Cherubim. After, he was found with iniquity, he was cast down to the Earth. he failed to honour God and then started a rebellion and was cast out unto the earth.

MARK OF THE BEAST VS MICROCHIP
THE LOST SECRET POWER OF PRAYER RE-DISCOVERED ​
WHAT REALLY IS SEEKING GOD'S FACE?
THE TRAGEDY OF LAZINESS
HOW TO KNOW IF YOUR HOME IS CURSED
BELLY DANCING - MOVES OF SEDUCTION
CHARGING PRAYER AGAINST SATANIC FORCES ON PROPERTY
THE POWER OF INTERCESSION ​THE OXEN ANOINTING
EXPLANATIONS OF MINISTERIAL GIFTS ​AND OFFICES
STRATEGIC INTERCESSION
Post Views: 194
Share
Facebook Twitter Pinterest Linkedin