THE END TIME AND THE IMMINENT RETURN OF THE LORD 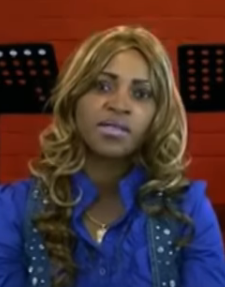 I saw the Lord Jesus Christ on a very high mountain. He was tall, He had put on a very wide garment. It was an exceptional dress. The tailoring was extraordinary. I never saw this kind of garment.

When I shouted Jesus three times, He turned around and looked at me. He smiled at me. In front of Him, I saw an angel.

When He had touched the angel, the angel began to proclaim and warn the people of the Earth about the imminent return of the Lord.

He said, “Jesus Christ of Nazareth is coming back soon.”

My dear, I saw a man dressed in white coming down from Heaven to the Earth. His face was shining like the sun. His body was covered with a rainbow. His feet did not touch the ground.

When the Lord visited me, I saw that His face shone like the sun. He was wearing a large crown of gold on His head.

The Lord said, “It is the crown of thorns, but now it isn’t tormenting anymore. It has become sweet.”

I saw that there was a flame of fire in His eyes and He was wearing a very white dress that was glossy. The Lord’s garment shines 1000 times more than fire.

The Lord has a big double-edged sharp sword that shines like fire. Only the Lord that can hold this sword with one hand.

When the Lord gave me this sword, I tried to carry it with my both hands. Even sitting, the top of the sword still touches the ceiling of my house.

I saw that the Lord’s feet were similar to hardened brass. I had the feeling that if you touch His feet for five seconds, you may burn your hands. When I sat next to the Lord Jesus Christ, my feet become hot because His feet are like a burning furnace. I saw that His robe had a sheath where He keeps the sword.

The Lord move like the wind, even faster than the seven archangels. The Lord Jesus is omniscient, for He knows everything and all human languages.

The Lord said, “Child, with My hand, I can touch anything at any distance.”

I saw that He has short brown hair and black eyes. He can do all things that are impossible to humans. He is omnipresent, for He can be everywhere at the same time. He is sweet and forgives our sins. He often speaks to His Father.

He said, “I am King of kings and Lord of lords, Savior of saviors.”

Obadiah 1:21, KJV: “And saviors shall come up on mount Zion to judge the mount of Esau; and the kingdom shall be the LORD’S.”

When He smiled, there was a strong white light in His mouth.

The Lord told me, “I am Jesus Christ of Nazareth, the One who resurrected Lazarus, the One who walked on water, the Savior of the saviors. When John the Baptist saw me, He knew that I was the Messiah. John the Baptist has curly hair. He is in Heaven with all My disciples, but Judas is in the abode of the dead.”

The Lord said, “Those who are dedicated in fasting and prayer must keep praying, and those who live in sin can keep on sinning. Most of the saints are distracted and wait until December to make intense prayers. Yet their everyday life was supposed to be dedicated to intense prayer.”

Jesus told me, “I wasn’t born on December 25. This date is wrong. It was spring at night when I was born not the winter month of December. The date of December 25 is wrong.”

The Lord said, “There are many religions because many don’t believe in Me and pray to other gods.”

My brothers and sisters, you who have agreed to follow Jesus Christ of Nazareth, He asked me to tell you to prepare for His return because the trumpet will be heard soon. But for the hour and the day only God knows.

The Lord told me, “The trumpet will sound. I have already instructed archangels and angels in Heaven to write the names of all humans on Earth that have made themselves ready, those who have kept their garments white for the Rapture. There will be more than 1000 angels with the archangels that will blast the trumpet. This event is imminent. In those days, men and women will be doing their everyday routine work and the trumpet will be heard. When you hear the sound of the trumpet, don’t go seeking for anything. One will be taken and the other will be left behind.”

In this vision, the Lord showed me the Rapture of the church. When the Archangel blasted the trumpet, the sun was all black. It was dark and there was darkness all over the Earth. All the Earth was on fire. I saw the Earth and grass were destroyed. The stars were falling like explosives and the Earth closed like a book.

My Encounter With Jesus Christ By Evangelist Emmanuel Omoobajesu

My brothers and sisters, be ready beyond the alert and vigilant. The minority that has purified themselves, those who have white garments will be taken up to Heaven and they will be rejuvenated. They will be clothed with youth and immortality.

The Lord said, “On that day you won’t remember that this was your husband or wife or daughter or son on Earth.”

I saw in the blink of an eye the Rapture happening.

Brother, when the Rapture happened, it was terrible. There were cries, chaos , and confusion. Where will you be on those days if you miss the Rapture? Those who missed the Rapture will face Hell on Earth, and their fate would be likely the place of torment. Don’t be distracted.

In a vision I saw of a vase that was descending, it was in silver. I saw that there was yellow vapor escaping from both sides of the vase. I smelled delicious food smell in those vapors. The food was ready.

In the blink of an eye, I found myself in a massive hall where they were countless multitudes. Beside me was a brother from my church. I saw that my husband and children were not there in this hall. The brother was also alone for his family was not there. I was lost in these crowds of the multitude. And I wondered, “What is this place? What is happening?”

The Lord said He already prepared for the places in Heaven. Blessed are they which are called under the marriage supper of the Lamb. These are the true sayings of God. (Revelation 19:9)

Jesus Christ has created a lot of new things for humans that will be taken up in Heaven. In the Rapture, there is a large hall where there are lots of delicious foods than we have here on the Earth. When you stop in front of the door, it opens by itself.

In Heaven, people will watch the real movie of Jesus Christ with His real face and how He walked the Earth. In the eternal age, there is no stress or crying or pain, only joy in the wedding of the Lamb.

My dear, don’t be running after the things of this Earth that will be destroyed. The return of the Lord is imminent. Walk in the fear of the Lord and righteousness.

In a vision, I saw a cloud above me, the angel of the Lord asked me, “What do you see?”

I told the angel of God, “I see nothing.”

The angel told me, “Look again, what do you see?”

He told me for the third time, “Look again. Well, what is it that you see?”

When I looked very well, I saw a city. This city was built with precious stones, the city shone and it was radiant. I was in awe and admiration.

The angel of God told me, “What you see is the New Jerusalem.”

The city was above the clouds slowly descending and it stopped in the air.

The Lord wanted to say the New Jerusalem is the new house of Jesus, the bread of life, where there is the water of life. There are all kinds of fruits we don’t have here on Earth. There are trees with flowers that are diamonds. There are more colors than what we know on Earth. There is no dirt in the sky or garbage. There are several activities in the celestial world.

The Lord said there are seven archangels, whose garments are multicolor. He gave me details and names of archangels. The Archangel Gabriel has a sword in his right hand. He announces good news to humans. The Archangel Michael brings justice to Earth. There are Archangels that record and write everything. Others deal with the gifts of the Spirit. Others deal with divine healing, sanctification, and others, the archives of Heaven.

The Lord said, “My children the angels do nothing without authorization from Me. All angels and archangels always follow My rule. They don’t sleep because there is no night in the celestial world. They don’t get tired and they do not sweat. They are dressed always in white dresses and they don’t need to wash them because they are always clean and they don’t need to wash their bodies because they are always clean. It was My servant, the Archangel Michael, who had rolled this stone off the tomb.”

My dear, pray and say, “Lord Jesus Christ, I receive You in my life as the only Lord and Savior. I open my heart and invite You to my heart and take all the room because You are my only King and my Savior. Amen.”

MAKKO MUSAGARA 3  | SATAN’S VERY HEAVY PRESENCE
DEMONSTRATION OF THE ANOINTING 2
SISTER FIDELE DEBILOU OF IVORY COAST EX-MARINE AGENT EXPOSES THE TRUTH BEHIND THE CATHOLIC MARY AND...
ARE YOU SURE YOUR NAME IS IN THE BOOK OF LIFE? PART 3
BROTHER JORGE 4 BRAZILIAN EX-SATANIST COMES TO CHRIST: SAVED TO THE UTTERMOST
SUDDEN DEATH AND ENCOUNTER WITH JESUS 2
WITNESS OKWUDILICHUKWU 14  8 GOSPEL MINISTERS & 17 CHURCH WORKERS IN HELL
EVANGELIST SAMUEL HERNÁNDEZ OF BRAZIL 1 MY 25-DAY FAST PART 1: FOUR REASONS FOR HELL
LITTLE LI OF CHINA | THE RED BUTTON
ORAL AND ANAL SEX ARE PROPERTIES OF JEZEBEL THE DEMON
Post Views: 65
Share
Facebook Twitter Pinterest Linkedin