A young man identified as Steven Kofi made a shocking confession on the (June 24, 2012), how he sold his soul to the devil for fifty years after joining the church of Satan (illuminati). 29 year old Steven Kofi said he sacrificed a baby to the devil.
HOW I SOLD MY SOUL TO THE DEVIL
Before joining the church of Satan, I sacrificed a newborn baby. I drank blood and all sorts of evil things. I later sold myself to the devil for 50 years. This very shocking confession story is from a 29 year old man. 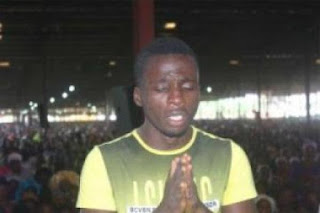 HOW I JOINED THE OCCULT WORLD
In his quest for riches, he joined 4 major occult groups where he committed the worst evil and abominations of all times. The man who hails from Ghana began his journey into the occult world at the age of 21. He joined the church of Satan International before later joining other occult groups named region of doom, Freemasons, skulls and bones in a bid to make quick wealth. He was once a very happily married man who has a beautiful child. His oil business was prospering.
HOW I SACRIFICED MY MANHOOD FOR WEALTH
After sacrificing his manhood for wealth, he had to abdicate his matrimonial responsibility to his wife for eight years. As if that wasn’t enough, the devil later gave him 49-day ultimatum to live. Faced with the threat of death after being given a 49 days ultimatum to live, the Ghanaian brother ran after God and later got a relief in Lagos during the a Church programmed held at The Lord’s Chosen Charismatic Revival Movement in June 24, 2012.
HOW DID YOU JOIN SUCH GROUPS AT AN EARLY STAGE IN LIFE?
The story started in my final year at the University of Ghana, I was studying oil and gas engineering, I got my master degree in oil and gas engineering. At the final year, things were so tough for me that I needed to finish my education, but there was no way to get financial help, at the end of the day I consulted my parents but it was fruitless.
Usually, I chat with somebody on the internet that helps me with money. He is a man and that was before I later got married to a Norwegian lady in 2003. We had a kid before she traveled, but she usually calls me on phone once in a while, at that time, I called her for financial help but she didn’t have any cash.
He said the person who used to assist him complained that he could not continue sending money to him, and as such, he has to fend for himself. “He told me that he cannot continue sending me money. He said I have to work for myself, and I asked him, how, he said you have to do it on your own”, he stated adding that from that point he decided to locate the church of Satan in Ghana where he was told that his initiation would be done in far away California, USA.
HOW HE MET WITH SATAN
Indeed, travel documents were prepared for him and he traveled to ground Lodge at Early Noise in California where his initiation took place. He said after the initiation process, he demanded to see the devil, and was asked to write a request letter to the devil which he did.
His request was granted within two weeks, and he was able to meet face to face with the devil who asked him to make three wishes, adding that his third wish for long life could not be granted because church of Satan members only live within the space of thirty years after joining the church of Satan.
“The devil demanded that I make three wishes from him, which I consented to, that I want to be famous, wealthy and live long, but the third one he refused to grant, disagreeing to the idea that any one that joins the church of Satan will always live for thirty years, once you join at 20, you live till 50. This I agreed to because I was eager for money”, Kofi stressed.
He further disclosed that after joining the church of Satan, Satanic Bible was made available to him, sword of slaughter, initiation glove, Suit and other
ADAO DE CAMPOS HE WENT INTO HEAVEN AND HELL

items. He however explained that he didn’t lose his manhood until he added another feather to his cap in the occult world by joining yet another group. “When I joined the Skulls and bones society, that’s when I sacrificed my manhood to increase my wealth”, he added.

HOW HE WON 23 SOULS FOR SATAN IN NIGERIA & GHANA
Beside the monetary gains from the cults, he was also sent on an assignment which is to win souls for the kingdom of Satan. Through this, he has won more than 23 souls for Satan, using the advantage of the wealth he was given. “Boys and girls who are eager for money, wealth, I show them the way. I have offices in Port-Harcourt, Warri, Abuja, Ghana, I give them what to do and they begin to make money on their own and also teach them how to join and I send them over”, he added.
HOW DID THIS BRING JOY TO HIS PARENTS?
Kofi said after making money, he decided to open a plaza for his mother in Ghana, but she rejected the offer, claiming that it was a blood money, because of her attachment to Christ and a vision she saw in which she saw the source of his wealth. But his father and siblings accepted him.
His trouble however started after he became uncomfortable with his life. At that point, he began to look for powerful pastors that could save his life. When his cults discovered he was going astray, he was penalized and given only 49 days to live. “I was given 49 days to live, I have spent 19 days, and it remains 30 days, before deliverance came to me through a man of God”, he stated.
HIS ADVICE FOR YOUTHS
After learning his lessons the hard way, Kofi is using this medium by advising the youths not to covet what others have while urging parents to restrict what their children watch on television screens.
HOW HIS MANHOOD WAS RESTORED
His lost manhood was restored during deliverance session at The Lord’s Chosen Charismatic Revival Movement Church in June 24, 2012, Kofi said “I give God all the glory that my manhood was restored back, am happy now that I can make more babies again.” Hope you have learnt a few insight on this confession from Steven Kofi, former member of church of Satan.
However, in our next update we are going to share the whole transcribes of his confession which was documented in video record. And also how he got his full deliverance from the church of Satan. He shed more light of his involvement in the church of Satan and the nightmare and his candy advice to Christians and the entire world, to be contended with whatever God has blessed them with, because vanity upon vanity is always vanity but the blessing of God makes riches; Proverbs 10:22 The blessing of the LORD, it maketh rich, and he addeth no sorrow with it.
The Downward and Upward Paths of a Christian Pilgrim – July 13th, 2020