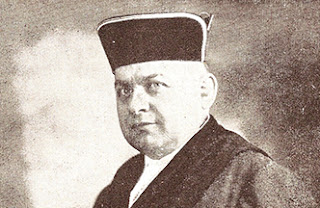 I was born in 1886 in Kronach, in the east of Germany. My father was a successful businessman and took Judaism very seriously. He was very concerned about my worldly education but also took great care of my religious training. He reminded me often that I was a Jew and that I should do credit to the Jewish nation. I also learned to fulfill all the traditions and ceremonies and I went with my father nearly every day to the synagogue. My youth was filled with the study of Hebrew, the Talmud, and other Jewish books.

A life of intense study at university followed. I went to study law and also studied other subjects such as philosophy. It was at university that my religious ideas changed completely. The philosophy of Nietzsche made me reject all religion. I thought that all we needed were a few philosophical principles, doing right to our neighbors and living an honorable life, and obeying our ideals. I wrote to my father telling him that I had given up the Jewish religion and declared how thankful I was to be freed from Judaism with its slavery of ceremonies.

I took my doctoral degree and established myself as a lawyer. I met a nice young woman and after some time I asked her to marry me. She came from a Catholic family. When her priest heard that she would like to marry a Jew, he threatened her with ex-communication. Her parents also resisted strongly this news. When she came to me in tears, I said, “We are both intellectuals and don’t need religion. Let us only keep philosophical principles from now on.” She followed her heart and to my great joy, she agreed to marry. Now we had each other and that was all that we needed. My business grew fast and materially we lacked nothing. Spiritually, however, we were poor, blind, and naked!

In Germany at that time, it was common to belong to a church, religious or not. My wife told me how embarrassed she would feel at times because she belonged nowhere. I liked to see her completely happy and agreed to join something. In the synagogue, however, she noticed that the Jewish traditions were meaningless for her, and I, from my side, couldn’t agree with the Roman Catholic teachings. A desire grew within me for peace and rest. My heart cried for ‘something’.

In 1914, the war broke out and Germany was plunged into misery. In 1922 German money lost its value. When I realized I had lost all my money, I suffered a nervous breakdown. A neighbor was concerned with my spiritual condition and often visited me. Against my will, he left a New Testament one day. After some time, however, I started to read it. Immediately I was extremely fascinated by the wondrous words. I had always thought that this Book taught the people to hate the Jews, but now I noticed, to my surprise, the opposite.

Prayer out of the depths

At that time I was a physical and spiritual wreck. Lost in utter despair at times, I saw suicide as the only solution. One evening I became horrified by the darkness in my soul. For the first time in my life, I kneeled down in my room to pray. With a loud voice, I cried, “O God, Is Jesus our Messiah? I need to know!” I cannot say how long I kept crying to Him in tears, but suddenly there was a radiant light. It seemed stronger than the sun, but the glow didn’t hurt my eyes and was not dazzling. I was shocked, felt paralyzed, and couldn’t keep my eyes off that shining, wonderful, staggering light. Gradually I noticed in the midst of this light, a figure of indescribable beauty.

His face beamed with infinite compassion and His eyes gave me wonderful comfort. His garment was whiter than snow. He was not old, although I saw in Him the wisdom of ages. He was not young, but I noticed in Him the pureness and freshness of idealistic youth. Completely conscious I remained fascinated on my knees, when to my great dismay and fear the wonderful figure came towards me. The nearer He came to me, the more fearful I became. I wanted to cry, but my voice broke. Then, when I laid there helplessly, he stretched out His hands, laid them on my head, and spoke with a clear, warm voice the comforting words, “My child, My child, I am the Messiah, I am the Messiah. Believe in Me, believe in Me!” While I stared at Him, He looked at me with great love and disappeared before my eyes. A deep silence filled the room. Remembering that I was ill and had to go to bed, I stood up and all the pain and feeling of being ill appeared to be gone! I felt completely happy. I realized that I had seen Jesus of Nazareth, the King of the Jews, my Redeemer.

My life changed completely, I became a ‘new creation in Christ Jesus’. In the past, I was satisfied with my own good deeds. However, the more I learned and the better I tried to live, the more insecure I became. I went into a terrifying darkness. Until I saw Him that day, in that glorious light and His pierced hands and feet! I saw my crucified King and heard His wondrous voice, “Come to Me, fear not, I have overcome the world.” Then I found hope, joy and happiness. In Jesus, I found everything that a man can ever desire. He took all my insecurity, He forgave my sins, He gave me a new song in my mouth. He set my feet upon the Rock, so that I now know, “My hope is built solely on His Blood and righteousness. I stand on the steadfast rock, Jesus Christ, and all other ground is quicksand!”

Called for the Jewish people

We had to leave our house and through God’s loving providence, we ended up with two believing sisters. One day they persuaded my wife to join them in going to an evangelistic meeting. It was there that she also came to believe that Jesus Christ is the Messiah. How happy we were that we both had found the same Redeemer!

Arthur felt himself called for his people. He established the Hebrew Evangelistic Society and many Jews found the Messiah.

Source: Arthur U. Michelson. My Life Story: Out of Darkness into Light. The Jewish Hope Publishing House

BROTHER KEVIN OF CAMEROON 1 |  PRAYERS THAT ARE IDOLATROUS TO GOD
WOMEN HAVE BECOME MERMAIDS UNKNOWINGLY BECAUSE OF BEAUTY PRODUCTS
MARY KATHLEEN BAXTER 1  DEMONIC POWERS INFILTRATING THE CHURCH
SUDDEN DEATH AND ENCOUNTER WITH JESUS 2
DEMONIC ORIGIN OF ARTIFICIAL HAIRS AND NAILS, OCCULTIC AND CORRUPTED CHURCHES AND PASTORS
PROF IYKE NATHAN UZORMA OF NIGERIA 3 CHANNELS OF VICIOUS ASTRAL ATTACK
DEMON SPIRITS OF ANGER
NAGAMMA A HINDU SERPENT GODDESS GIVES HER LIFE TO THE LORD JESUS
IMAM WHO HATED CHRISTIANS DIES, BUT JESUS SAVES HIM FROM DEMONS AND RESTORES HIM TO LIFE
SISTER FIDELE DEBILOU OF IVORY COAST EX-MARINE AGENT EXPOSES THE TRUTH BEHIND THE CATHOLIC MARY AND...
Post Views: 263