Reason Why You Need To Marry A Man With A Vision 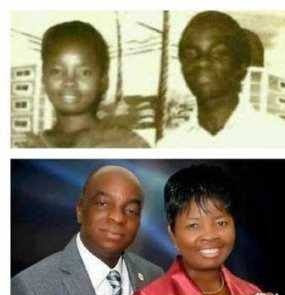 Marriage is an interesting segment in transit of life because it involves up and down hiccup and there is no marriage that is perfect. And there is nothing like Heavenize marriage without misunderstanding that is what makes it more interesting.
Marriage involves the act of development, building and enhancing the productiveness of your partner. Marriage isn’t a selfish umbrella or Heaven’s where you lay your bed. No, isn’t a bed of rose but rather a mining companionship, a solidify rock where you dug in order to discover and mined the hidden or undeveloped potentials of your partner into a finish goods.
The reason why some marriages are in chaos and apparently at the verge of civil-war is due to ignorant. Thus two companion or mining partners are both ignoramus. They virtually don’t understand the basic concept and reason why they got married.
In our societies today, more likely in the church, you will behold some Christian homes and even pastors struggling in their marriage. Sometimes it often sound funny and foolishly to behold a pastor who suppose to cherish and governing his marriage, build and discovered the hidden lapse in his marriage and try to cultivate or reconstruct it, been burnt-out zealously for Kingdom works in negligence of the faulty state of his marriage.
As a Pastor your marriage “must” always comes first before your ministry and that should be your utter most priority because without constructing a healthy marital living you ministry will likewise suffer chaos.
Reason Why You Need To Marry A Man With A Vision:
The word vision simply means “Active Brain” and it’s unfortunate that some sisters are presently getting married to a man whose Brain-Cells are dead and rotten both spiritually and mentally but presently dwelling on an immediate.
My sister, please kindly look straightforward and embrace a man who has a vision. Though he might be poor at this moment but if he has something vital to offer in “future” I will suggest you sacrifice the immediate for the future and stop using Geometric and quadratic eyes to solve his financial riddles.
When you gives a man of vision (Active Brain) One Million Naira, in few years he will surely build an Empire. And when you receive marriage proposal from the same man who has future plans, goals and vision, and spiritually dedicated and hardworking but presently in poor state of life,
I mean, instead of degrading or rejecting his marital proposal you should rather go into prayers and seek for God’s approval and immediately channel your sub-conscious mind on how to serves as a help-meet, to strengthen and encourages him to focused on his dream.
Moreover in short while, you will certainly reaps your reward because getting marry to a dullard man without future assessment but presently managing life with some few investment, will later results into penury because life is all about upgrading, and it’s only men who has something upstairs (Active Brain) can compete with revolution state of life.
READ ALSO: Marriage Proposal Is A Blessing And Not A Curse — Sisters Beware.
Any unfortunate woman, who rejects a man with a vision and follows a man with a television, will soon watch a man with a vision on her husband’s television. So, kindly marry a man that is spiritual and has a vision, someone who has future because isn’t all men that have future or vision.
The 700 Club – The 700 Club – November 4, 2020
Some of this bachelors peeping To and Fro like fowl, chasing after you has nothing in their Brain. Most of them have a rotten mindset. They don’t think “big” and never plans to attained higher phase in life and if you unfortunately get stocked with them — you will blame yourself!
Many ladies often expect marriage to be so easy. You expect it to be a world of roses and laughs and perfect moments that you find only in movies. You expect your man to always say the right thing, and always know exactly how you feel, or exactly how to react to it.
You expect him to calm you down when you’re yelling or to chase you when you run away. You expect so much that you feel entirely, utterly defeated when something doesn’t exactly match up with all your plans. But that’s the thing, marriage isn’t a plan but rather the ability to reasons, preview and immediately reconstruct every broken bridge or leakage and it begins with YOU (wife).
Like An Avalanche – HillSong United

How To Wins The Heart Of A Lady — Your Future Life Partner
Gangbanger Physically Encounters JESUS in Prison - Powerful Testimony!
Hello world!
No One But You (Live) - Hillsong Worship
A PRAYER OF REPENTANCE & DELIVERANCE  FROM SPIRITS
Marriage Doesn't Define Your Existence - Sister's
Deliverance From The Bondage Of Spiritual Wife And Husband
How 60 Years Old Lady Got Her Marital Breakthrough
The Best Way To Propose To A Lady For Marriage
VICTORIA NEHALE OF NAMIBIA  UNFORGIVENESS AND UNPAID DEBTS
Post Views: 344
READ ALSO  How To Differentiate Between Lust And Love In A Relationship
Powered by Inline Related Posts