I SAW ANIMATED CHARACTERS IN HELL TURNING TO DEMONS 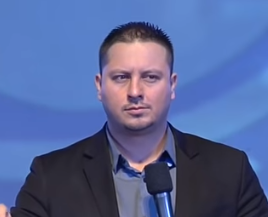 Pastor Garcia saw animated cartoons turning to demons in Hell. The Bible says in Proverbs 22:6, train up a child in the way he should go and when he is old he will not depart from it. Bring them up in the discipline and instruction of the Lord.

Welcome beloved. I was praying at dawn when the Lord manifested and said, “I have revealed Myself by day and night but today I manifest Myself at dawn because I want you to take this message to the end of the world.”

While Jesus was speaking I got up and I continued to pray. Then I had a vision unfolding in my spirit. I started having a headache.

In this vision I saw Hell, the place of torment, and in Hell, I saw a lot of cartoon characters who were turning themselves into demons. They were no longer animated characters, they were real and living beings. The devil has inspired directors and producers to familiarize our children with demons of Hell by presenting them as good.

Suddenly I saw a deep dark tunnel and I saw many souls falling in that dark tunnel. When I opened my eyes I saw that I had left my body and I was encountering a place of torment.

I had been here in the previous experience. I could not see the Lord nor His light. I could only hear His voice.

I said, “Lord, why am I in this place of torment again?”

The Lord told me, “It is necessary to see what is happening in this place as there are many souls falling in Hell because of disobedience in believers. Many who are far away from the church are falling through this tunnel because demons have deceived and outsmarted them.”

When we landed in Hell the Lord said to me, “My son, observe carefully.”

When I looked I saw how lost souls were going towards that black tunnel. Many of them thought that life is all that the Earth is offering and that after death there is nothing there. Life was focused only on the things of the Earth. They serve the world and they live on the Earth with comfort and they said, “Life is so short. Let’s enjoy ourselves.” They did not care to repent and they did not care to prepare for the afterlife and when they died suddenly in an instant they were falling in the tunnel leading to the place of torment. When I landed in Hell I trembled because I did not see the light.

I said, “Lord in the last experience I was with You and I could see around because of Your brightening light but now I am only hearing Your voice.”

And the Lord said, “I want you to see how the demons want to destroy My people.”

The Lord showed me how the demons rushed from Hell to the Earth with tremendous speed because their time is finished. Demons were in a rush because there is no more time. The trumpet of the Lord may sound at any moment.

I saw how demons were destroying everything from children to parents by causing anxiety in homes. That’s why there is no peace in homes because the enemy is emerging from Hell. They are surrounding and besieging the Earth. I saw countless demons heading to Earth and coming upon children through cartoons.

Demons are entering inside children because parents allowed their children to watch cartoons such as Simpsons, Ben 10, and Goku. People do not know these cartoon characters are demons.

I saw a multitude of demons throwing themselves at the children and these demons plagued the children. I noticed that they had the same face as the cartoon characters. They threw darts into the eyes of children. That is why there are children that are becoming rebellious and spoiled with parents. They are disobedient toward parents because of the demonic power in cartoons.

In Hell, the demons laughed and they mock the children that they were torturing in Hell telling them, “This is your kingdom. You are not coming out of here.”

These demons were cartoon characters that their parents allowed them to watch. I saw a girl that was from my family in this place for being rebellious towards her mother.

Parents teach your children the ways of the Lord even before the kids reach the age of reason and accountability. They must be taught the Word of God and they must be kept from demonic cartoons and when they reached the age of reason they will have knowledge that can lead to Heaven and Hell.

Rebellious kids will land in Hell when they die. I could see many who walked in rebellion here.

The Lord showed me a big screen how many demons were traveling to the world into the churches. I saw the demons who were bound to cause destruction in families. They put chains on the people of God. They wanted to shut the mouths of Christians so that the world will not hear the gospel so that no one will enter the kingdom of Heaven.

We have to be holy and without cleaning up the children we will not enter Heaven. We as parents will also give an account of what we teach our children. In Hell, the demons threw themselves to children and they said to the children, “This is your kingdom.”

The Lord showed me people who were murderers. Then I saw people who had committed suicide. They were cursing people who offended them to the point of committing suicide. They were saying, “It is because of you I’m here.” There was a lot of hatred here coming from people who killed themselves and demons gave laughter and said, “Praise me because this is your kingdom.”

He told me, “Tell the women to stop aborting their children because many women who had aborted ended up in this place.”

Jesus said, “Even in the church many Christian women are doing abortions and are failing to regret it and failing to ask for forgiveness to God.”

When You See The Lord

These women who committed abortion are landing in Hell the abode of demons. There is no mercy here. These women who have aborted were laid on a dirty table and the demons came with a large hot spear and introduced this in their body and took the flesh of them and they laughed. These women shouted for help.

The Lord told me, “Tell women not to do an abortion on Earth.”

Then I saw demons coming to me. They seem like monsters and they said, “Curse you!” They threw themselves on me.

The Lord told me, “You need to feel what the souls are going through here.”

I saw the demons welcoming me with mockery in Hell and they took an arrow and they stuck it in me. They said, “Curse you. You’re not going to leave this place. You are going to be here forever.”

Then they said to one another, “Let’s tear him apart.”

They hit me on the mouth. I felt like a part of my mouth was broken. I said to myself, “The Lord has abandoned me here.”

I saw in Hell people who spent their lives in sexual sin and sexual immorality. There were worms on their bodies. Worms enter through their genitals part and demons pick up large irons and introduce these irons in the intimate parts of women and in the waist of homosexuals.

These demons told them, “This is your kingdom here. You must adore our father the devil. There is no mercy of the gospel here.”

I thought I had died in sin. That is why the Lord has left me here and demons were still tormenting me. They stacked me with knives in my leg and I felt the torment.

The Lord told me, “You only needed a little more. This is for you to feel Hell is real because many do not believe.”

I was encouraged and I came to understand that I will come out of this place.

While the demons were tormenting me, I said, “Jesus Christ lives.”

The demon told me, “That name cannot be spoken here. We all have to serve our father the devil here.”

I said again, “Christ lives and I’ll follow Him.”

Jesus told me, “Tell My people that I want clean people. My people must always repent because this place waits for those who fail to repent. This place is for people who fail to do My will and fail to keep My word and people who have turned their back on Me and went back to the world.”

I told the Lord, “Please get me out from here.”

Then I started to run because demons followed me to torture me again. Then I ran to a place where there was a door and there was a character that seems like military but I did not see his face. He was around the door and I told him to help me. He told me to stand behind him and I went behind him. This soldier was holding a sword and a gun. He gave me the gun.

He said, “This will protect you. Nothing can touch you.”

When demons came around I saw that the presence of God filled the place. Then this man said, “Do not touch him.”

When this man spoke these demons fled and ran away.

The Lord showed me how the demons rushed here on Earth. We must cover ourselves with the armor of God. Cover yourself with prayers.

The Lord said, “Repent. My people have to seek Me in fasting so that their chains can be broken. Many have withdrawn from the church but tell this message to the world and men who are double-minded and unstable if you are loving the world you are being hypocritical with Me. No one that is hypocritical will enter into My kingdom.”

EX-WITCH 4 |  FROM EX-WITCH TO WOMAN OF GOD
PROPHET DIEGO ORTIZ OF MEXICO 2  THE ATTACK OF THE SEVEN-HEADED DRAGON ON THE CHURCH
THE CHAMBERS OF THOSE WHO INFLATED PRICES FOR DISHONEST GAIN PART 2
MAJED EL SHAFIE OF EGYPT |  TORTURED FOR CHRIST
FELLY GRACE OF DR CONGO 4 THE COVID-19 VACCINATION IS SATAN’S PLOT TO CAPTURE SOULS BEFORE THE GREA...
DEMON SPIRITS OF ANGER
LITTLE LI OF CHINA | THE RED BUTTON
SISTER VICTORY AKDJAKPA BOOK OF LIFE, JOHN WESLEY’S MANSION, ABANDONED HOUSES IN HEAVEN
FARID |  A FORMER MUSLIM RECOUNTS AN EXPERIENCE WITH JESUS
OBINNA AKUKWE OF GHANA 5 THE ACTION PLAN AGAINST MARINE PASTORS, RANDY PRIESTS AND FALSE PROPHETS
Post Views: 89
Share
Facebook Twitter Pinterest Linkedin