IN YOUR HANDS I LEAVE THE LIFE OF YOUR FAMILY 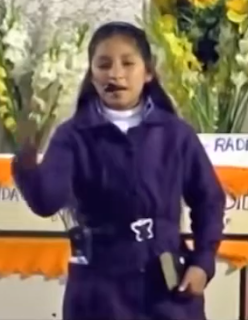 This is the divine testimony of an 11-year-old girl Nayeli Gómez Utus whom Jesus Christ took to Hell to witness the consequences of pursuing artificial beauty, makeup and cosmetics and other interesting revelations that will shock you.

I am 11 years old. Brothers and sisters family, I want to tell you, brothers, that before with my pocket money, I would buy beauty products. I like to put on nail polish. I like to put the perfumes of my parents on my arms without their permission. I love to play with Barbies dolls, watch all kinds of things on TV, including the series and battles on TV. I didn’t go to church. The Lord doesn’t like people that practiced all those things of the world. Parents that have watched sports, the mothers that have watched their series, the youngsters that have gone to parties, the children that have watched cartoons on TV and who are dead today are in Hell.

Nobody comes to the Father except by Jesus. Jesus is the Way. Jesus is the Truth. Jesus is the Life. Everybody that trusts in Jesus will never die. They will have everlasting life. I invite you to close your eyes and stand up so that you can help me give a short prayer so that I can start my testimony. Heavenly Father who art in heaven hallowed is Thy name. Let Your spirit come upon me so that I can testify. Thank you, Jesus. Amen amen amen amen.

This is my testimony. On the 29th of June of 2013 my brother and I arrived to church and we started praying.

At that moment, I saw the face of a demon that told me, “Come, come,” and I told my brother, “Brother, I see a face,” and the brother said, “What? What face, Nayeli?” The demon kept on talking and he said, “Come, come, come, come. I will make you happy.”

I heard my brother say to one of the children, “Run. Go call the pastor.”

At that moment, I lost my consciousness and I was in a black place and I could hear the steps of the demon that had talked to me. I could see all his body and he would tell me, “Come, come. I’m going to make you happy. Come, come.”

In that moment a man fell at the tip of his toes. His mouth was closed. He couldn’t talk and he would stare at me and with his eyes like he was telling me, “Escape. Get out of here. Escape,” and I asked the Lord Jesus, “Who is he?”

The Lord told me, “It’s your grandpa. They talked to him about Me but he ignored Me.”

I told the Lord, “But how can my grandpa be here?”

“They told him about Me but he ignored Me.”

I told him, “But which of my uncles?

The demons took my uncle away in a black room and at that moment the Lord wasn’t there anymore. I was alone and I looked everywhere but He wasn’t there. They were laughing and others were talking and they would say, “You will stay here. You will come here.”

There were women and few men and a demon took a nail and another demon took a hammer and they did holes in my ears. They put me a big earring that went to the tip of my toes and I would scream, “Why Lord, why have You left me? Look what they’re doing to me. Look what they’re doing to me.” That earring was heavy. Everywhere they would put rings on me.

And they took me to another room. They took my tongue out and they asked me, “Your God that you worshipped, the God that you served, does He exists?”

Then because I said the truth they cut my tongue and that was the room of the liars. The one that says the truth but not live the truth, they would cut a piece of their tongue. To you youngsters, young ladies, young men that like and that love to lie to your parents to your neighbors those persons are in Hell because they lied.

They took me out of there and they took me to another room. To you women and men that go to parties you drink those liquors, if you die without repenting you will go to Hell. You will drink acid without ceasing.

All kinds of persons whether children, youngsters, women who were stealing, the demons gave them a time and when they didn’t bring something they would cut their hands and there you had to bring at least a rocket. They didn’t come here to Earth to steal but where they were they had to steal. All those persons that have stolen from their parents and from their neighbors are in Hell.

They took me out of there and the demons pushed me and there I started screaming, “Lord, take me out of here. Lord, where are You? Why have You abandoned me, Lord?” But the Lord didn’t answer. Demons would tell me, “You will stay here. You will come here.”

And the Lord didn’t answer and I told Him, “Lord, take me out of here.”

He took me to a room and there was a young man. He was dancing repeatedly and the Lord told me, “He is Michael Jackson. When he was on Earth he did a pact with the devil and that’s why he’s here.”

And the Lord took me out of there and He took me to another room and there were a lot of people.

I asked, “Why are they dancing?”

The Lord told me, “They were the fans of Michael Jackson.”

The Lord took me to another place where there were a lot of artists and they were playing on skulls that were singing. They would take a stick but when they took the stick they would burn and they had to sing because if they stopped the demons would punish them.

There there was a young lady that was dressed in a special way but when she saw the Lord she started screaming. She said, “Mercy, mercy, have mercy on me. Take me out of here for a second only for a second.”

She didn’t ask a minute neither an hour but a second.

I asked the Lord, “Why isn’t there any hope for them?”

And the Lord told me, “I cannot take them to My kingdom because I had already given them their chance.”

The Lord took me out of there and the persons that were there would come to Jesus.

And when the person heard that they would hide.

The giant demon grabbed me but the Lord brought me by the other hand. The giant demon was pulling me and I wanted to go by the side of the Lord but the demon keeps on calling me. The demon let go of me and he said, “You will come here.”

But the Lord told me, “You still have to see more.”

And the Lord took me to a place and all my family members were there including my parents, my brother, my uncles, and some church members. I thought they were dead and I asked the Lord, “But why are they there?”

The Lord told me, “They reconciled with Me. I put into your hands the life of your family.”

The demon was saying, “One of your family members is worshiping the demon.”

I said to the Lord, “Who is worshiping the demon?”

The Lord told me, “Your aunt.”

The Lord told me, “Your Aunt Clara.”

I told Him, “But how can You say that? It’s true that my aunt dance to the songs of the world but she doesn’t worship the devil.”

The Lord told me, “But the devil thinks that your aunt is worshiping him.”

I said to the Lord, “Lord, take me out of here.

The Lord told me, “You still have to see more.”

The Lord told me, “I will take you out of here but you will have to tell everything that you saw here.”

The Lord told me, “You have to say it not only in your church but in different places and different churches. Otherwise the demons will keep on saying to you, ‘My king, my king, my prince wants you to come with him.’”

I said the Lord, “Lord, whatever You want. I will say it but please take me out of here Father. I don’t want to stay here.”

The Lord grabbed me by my hand and I disappeared and I appeared in front of the door of Heaven and I asked Him, “Where are the babies? Where is the baby of my aunt that died in her womb?”

The Lord told me, “He is in My kingdom. He is joyful but at the same time he is crying.”

I asked Him, “Where is the baby of my other aunt that died in her womb?”

The Lord told me, “He is also joyful in My kingdom but he is also crying. They cry because their parents are taking bad ways.”

The Lord told me, “That’s why in your hands, I leave the life of your family.”

Then the Lord said, “The demons will come out and they would keep on saying, ‘My king, my prince wants you to come with him.’”

I said to the Lord, “Lord, take me out of here. They’re coming for me.”

The Lord grabbed me and I appeared again in the church and I didn’t recognize anybody not even my parents and I kept on hearing the screams in my head and one of the brothers said to me, “Say, ‘Jesus.’ Say, ‘Jesus.”

And from my mouth, the word ‘Jesus’ came out and there the scream stopped and I regained my memory and I recognized my parents.

My brother in the book of Revelation 21:8 But the fearful, and unbelieving, and the abominable, and murderers, and fornicators, and sorcerers, and idolaters, and all liars, shall have their part in the lake which burns with fire and brimstone: which is the second death.

Brothers and sisters youngsters and young ladies persons from all over the world if you doubt the existence of Hell, I confirm to you that Hell is real because all those persons that have died without Christ are in Hell. You have a second chance to repent but there’s no more opportunity for them. You and I have the opportunity to repent. Jesus loves you. Jesus loves you. Jesus is saying to you, “Come to Me and I will give you rest.”

ANOTHER WORSE PANDEMIC IS ON THE WAY
PERPETUA OF ROME | MARTYRDOM AT THE HANDS OF NERO
CATHOLIC PRIEST TO EVANGELICAL PASTOR
KEVIN ZADAI OF USA 1  THE SECRET PLACE
BROTHER JORGE 3 BRAZILIAN EX-SATANIST COMES TO CHRIST: THE EVER-PRESENT HELP OF GOD
VERSES OF WISDOM AND WATCHFULNESS PART 1 ADMONITION: SUBJECT -- SHEEP IN THE MIDST OF WOLVES
PROPHET DIEGO ORTIZ OF MEXICO 2  THE ATTACK OF THE SEVEN-HEADED DRAGON ON THE CHURCH
ASTON ADAM MBAYA OF CONGO 20 JUDGMENT AT THE GATE OF HEAVEN FOR CHRISTIANS WHO HAVE DIED
AUGUSTO MAQUENGO 3 SOUL TIES
ORAL AND ANAL SEX ARE PROPERTIES OF JEZEBEL THE DEMON
Post Views: 263