This confession is the 4th part in of the five volumes, from the excerpt testimony of brother Augusto Quiala Maquengo, a former servant and dedicated son of the Lucifer. To fully benefit from it, you need to read the remaining other 5th parts in numerical order.
MY ENCOUNTER WITH LUCIFER HIMSELF AND HOW THE LORD DEFEATED HIM
It was a Friday, I was coming from work at 6pm. throughout the day, and I had been thinking and reflecting on the Lord. The previous day, I had a serious revelation that gave me the impression that something mysterious was going to happen to me. So, when I arrived home by 6:30 pm, I told my wife that I wanted to lay down and listen to the News from the Living room under the mosquito net.
It was the first time I had had an “out-of-the-body experience. Just as I started listening to the News, an angel appeared in the room and in that vision he told me to stand up and that we needed to go. The Angel in charge of me came to my room at 7pm while I was lying down and listening to the News after a hectic day at work.
The angel asked me to rise up and let us go. I was under the mosquito net as there were many mosquitoes in that time in Angola. He picked me up from the bed and took me to the church hall where he started giving me instructions and training me on how I would meet a figure in the spirit world without yet mentioning the name.
As mentioned before, my family had made a covenant with the Dragon and Leviathan (the devil himself) and sold our lives to him, even as many slaves to America and Europe. So for the Lord to break that huge covenant, I needed to face Lucifer himself in the second heavens. I got up and to my amazement, I could not touch my body, I tried talking to my wife but it seemed unfruitful. 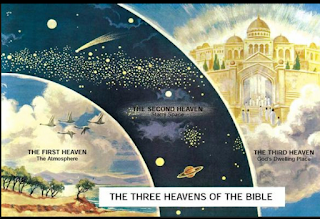 I tried to motion and wave my hand to her, but it seemed difficult. I and the angel went a long distance up to the church hall and at that moment I did not have any clothes on me but the angel guaranteed that I would wear my proper clothes once we were in the church premises. I thought we would not find anybody in the church but to my surprise there were many people singing and worshiping God.
What was amazing was that there was fire over their heads; they were under the anointing of the Holy Spirit. There were also intercessors praying for the general overseer of the Church. The Angel took me immediately inside a church room and dressed me up and put me in the center of the church while everybody was looking at me.
And from the expression on their faces, I had the feeling that I had a difficult mission ahead of me to accomplish. The Angel told me who I was going to meet and how he was. He then trained me, teaching me how I should behave when I meet this personality and what I should do!!
After the training, the Angel held my left hand and we went right up to the second heavens where we landed on a temple that was so weird, it was clean but had a pentagram and a circle around the pentagram star. The temple had four white stones on each corner and when I saw that I knew within me that I was going to meet somebody weird and evil. The temple was full of evil and there were giant demons chained as guards around the temple pillars. 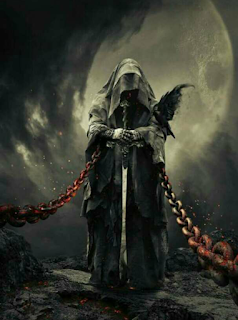 The angel went and sat on a tree outside the temple in the second heavens and started looking at me with his legs and hands crossed like somebody seating down comfortably. I started looking around to see the person that the angel who had described to me at the church premises. While I was turning around this evil temple the angel seated at the tree signaled to me to look behind and when I did, Lo and behold, a young, beautiful, charming, attractive personality full of seduction was behind me. 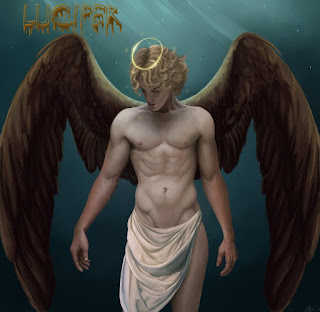 Brethren, Lucifer is not who we think he is. He was so attractive that the apples of his eyes were pulling me towards him as if I was going to enter inside him. His power was so big that I could barely stand on my feet. When I faced him, I looked into his eyes as the angel had instructed me, his eyes looked crystal clear around but too evil black at the center, and I felt as if it was pulling me from the floor to swallow me up.
His eyes depicted evil and I felt I was in danger of dying. I had to stand firmly grounded to the floor to avoid being extracted by these evil eyes from the floor into that evil world which the center of his black evil eyes depicted. The angel at the training had told me to always keep my eyes fixed on him and to never allow my eyes to deviate whilst looking at him and that I had to look into his eyes and not fear.
So I started looking into his very eyes while both of us were moving around the temple with each one’s eyes concentrated on the other. I did not know then why this scenario of eye to eye search was taking place and what it meant. The angel sitting in the tree spoke to my mind as if he had read my mind and knew what I was thinking, saying: because it is written, “The eye is the lamp of the body. If your eyes are good, your whole body will be full of light, but if thine eye is evil, your whole body shall be full of darkness and how great is that darkness! (Matthew 6:22-23)” and this is why the devil is looking into your eyes to find a fault in you.
Immediately I heard that in my spirit, I got a Holy anger and started concentrating on looking very intently into the devil’s eye and within me confessing Christ. Then the devil started misquoting the word of God by twisting some verses, and I started contradicting Him saying,: no, it is not written like that and he would say; it is written, I would say, No it is not written like that, all this while, I was not mentioning at the end of my declarations, the name of Jesus Christ, when at the last misquote of the devil I angrily said: NO, it is not written like that in the name of Jesus Christ.
Immediately, the whole temple ground trembled as in an earthquake and the giants fell down and the devil was thrown down on what looked like concrete floor. He started shaking there where he changed into an evil beast and with a shout and smoke disappeared. As I write the account of what transpired that day, it is as vivid now in my mind as if it happened only yesterday.
After that I stayed there alone, looking for him to re-appear anytime. While I was looking, he re-appeared in a smoke like appearance of evil and full of wickedness this time, all his powers were loaded upon him and evil was radiating from his head and he had different kinds of wickedness. 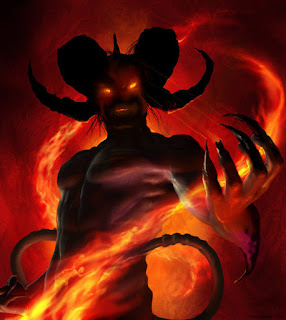 I said to myself that this time he would tear me apart and swallow me seriously. But to my amazement, I felt peace and calm come upon me I was able to concentrate and I started fighting him fist-to-fist. I would strike him on the head and he would strike me back without success. While I was in this state, I physically woke up to urinate, but even at that level, I tried touching my wife to speak to her, but was unable to.
Each time I would visit the gent’s and almost immediately, I would return to the second heavens with the speed of light. This happened about three times. I hardly noticed the transition between getting up to pass water and the moment of fight in the second heavens.
I immediately looked at the angel who was seated comfortably on the tree, thinking that he would come and help me but he remained where he was seated. I thought to myself, why is this angel not coming to help me out? And he read my mind again and replied: This battle must be fought by you ALONE.
Then I and Lucifer continued fighting and fighting when the angel signaled to me that there was a stick like a baseball bat on the floor, then I picked it up and struck the devil on his forehead and it got swollen; he developed a very long bump with blood at the end of it which was not dripping or falling. 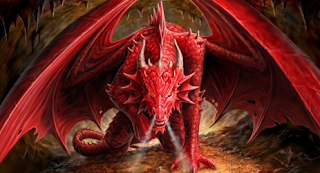 After all the troubles, I went through, the Lord started restoring me. The Lord restored my spiritual being as a human being and poured His glory upon me. The Lord baptized me with His Holy Spirit and several gifts started manifesting through me until now. The Lord provided a job while in the fasting of 21 days, healed me and my children.

THE POWER OF THE NIGHT VIGIL

Brethren, our God is awesome and very powerfully. He exists for us and He is a really Father who defends His children fiercely. I speak only by His grace and power. Brethren, this experience has gotten me very aware of the powers of wickedness and the kingdom of darkness, but most assuredly about the Mighty and awesome deliverance of our Lord Jesus Christ.
This is the first time I am writing this experience of mine to be distributed to everyone, to build up your faith in the Lord and to assure you of the victory we have in Christ Jesus our Lord and Master. I normally talk about it in bits and pieces, but has never written it down in its entirety for anyone to read till now.
Recently, Lucifer appeared in my bedroom to shout at me and ask me why am I sharing my testimony. Brethren, it is absolutely a divine instruction to share my testimony with everyone. The Lord knows that it will deliver many and encourage many to know that the devil is a defeated foe even with all his powers. To Continue In Last Volume; The Coming Of Our Lord Jesus Christ – Visions Of The Rapture”
70 PROBLEMS THAT MUST DIE PART 2